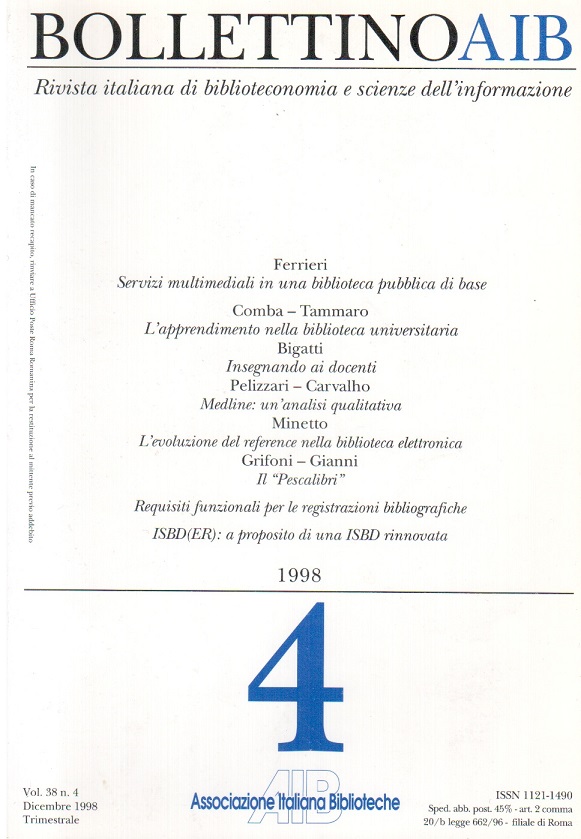 The article surveys the recent development of multimedia sections and services in public libraries of Milan Province, with particular reference to that of Cologno Monzese. The arrangement which appears to prevail lies mid-way between the "Italian tradition" in terms of media and non-book services, and the trend pioneered in France.

The development of multimedia services in the Milan hinterland owes much to the active contribution and support of Milan Provincial Council. Since 1997, it has promoted the Multimedia in libraries project, which fostered the development of four multimedia poles, one of which at the Cologno Monzese Public Library, where a new multimedia section opened in 1997.

Although the indications and guidelines for designing multimedia services are still few and far between, the inevitable empiricism which often underpins the decisions regarding architecture, fittings and structural arrangements, allows one to identify some fundamental needs of spatial organisation: underlying flexibility of the stations, technological flexibility which allows the periodic substitution of broken or obsolete equipment without excessive effort and dismantling of the entire section, the section's location (well linked, but not too close to the borrowing area, and above all not immediately adjacent to the reading places); attention to the ergonomic and lighting aspects.

The Cologno Monzese library has also presented Lombardy Regional Council with a project entitled Nessuno escluso (Nobody excluded) for the development of multimedia services aimed at the less technologically skilled sections of the public. This project's objective will be pursued not only through courses, workshops, promotions and other initiatives, but also by choosing the most friendly equipment and interfaces.

As regards the problem of librarians' professional training, in the coming years they should prepare themselves for a transformation: if they wish to continue to collect books and promote reading, they should also be prepared to become discerning but also adventurous navigators of infospace.

Few libraries have drawn up written regulations for the use of multimedia services: Cologno Monzese allowed a reasonable period of trial before enshrining the rules for use, and also the service standards to be guaranteed, in a Services Charter.

In medium-size libraries, the multimedia section quickly tends to monopolise the staff's attention and energies. There is a very strong demand for assistance, even of a every elementary level, from the public and one of librarians' principal tasks is to increase the levels of general information literacy so as to concentrate on more skilled consulting and reference duties. In addition, there should be promotional campaigns aimed at those sections of society which are least familiar with and least use Internet. As the uses of the computer are varied and diversified, another fundamental problem of marketing the services concerns the limits and constraints of use. Each library should ensure that the needs it can "cover" is clearly circumscribed, in accordance with its proposed mission.

What about fee policies? The author believes legitimate the policy, now broadly practised in many libraries, which sets charges (which almost always only cover costs) for some value-added or labour-intensive services.

One of the most debated points concerning the new information technologies is that of the progressive abolition of filters and intermediaries between the user and the documentation. However, the author does not really see this trend for the moment: even in the future, when the actual availability of telematic reading on demand services may become attractive for some sections of the public, it will be counterbalanced by the increased need for digital-highway guides, advisors and intermediaries. The confirmed role of librarians and information brokers as intermediaries should, naturally, not lead to a suffocating excess of assistance to users. What holds for books also does so for multimedia resources and products.

Interestingly, the garrulous society of the media which holds forth on disintermediation has been very solicitous in demanding librarians' intermediation to limit or prevent access to certain Internet sites to the underage and others.

The introduction of multimedia services would be lacking and even counterproductive unless accompanied by a campaign of multimedia promotion and literacy, whose role should be similar to - and profoundly interwoven with - that of promoting reading in the library.

This is the terrain of the decisive challenge: that which leads the library to face up to the cultural and anthropological revolution induced by the new technologies of communication.