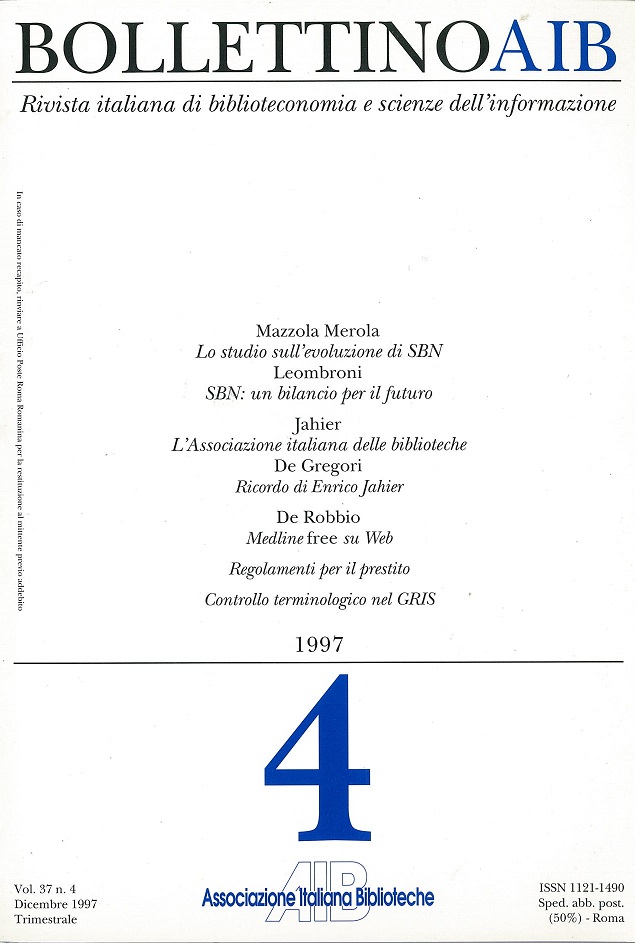 Some twenty years ago, the National Library Conference, held at Rome in 1979, called for the creation of a "national library service" (Servizio Bibliotecario Nazionale, SBN). The Conference was urged by the Italian Library Association (AIB) as an occasion for reflecting on the lack of coordination between the central government and the regional governments engendered by the 1972 Presidential Decree which decentralised powers regarding libraries.

The period which has passed is sufficiently long to draw up a critical balance sheet. In truth, after the enthusiasm and hopes of the initial years, the SBN was periodically the object of, generally negative, balance sheets, and the strong delusion led to the project being blamed for the shortcomings and negative elements which instead belonged to Italy's library services as a whole.

In some aspects, the SBN should return to its origins, to that nucleus of sound values which in 1979 induced the link between the nascent idea of a "national library service" to Italy's need to equip itself with an information access structure "for the lifelong education of its citizens". In short, it should revert to its initial focus on serving the citizen. The citizen rather than the user. The citizen who has the right to access all information and knowledge; the citizen who does not distinguish libraries according to their governing bodies or size, but who has the right to access the services of a national infrastructure from all corners of Italy. From this perspective, there is perhaps no longer any sense in speaking of the SBN as a national "library" network. The library profession should embrace the concept of "network for the access to knowledge and education", which includes not only the library services, but entails participation by all the players involved in the cognitive processes: libraries, information services of various types, publishers, schools, universities and training organizations. We should be aware that we have to manage a sort of "distributed database of knowledge".

The entire SBN technical documentation should be made available to allow all interested players, perhaps gradually and within a precise framework of rules, to develop software applications in a regime of competition. The local bodies would thus be able to choose the best quality product at market prices and following a regular call for tenders, with considerable savings as regards maintenance, assistance and management costs.

In this context, the development of the software and definition of the services should take place within the framework of the functional standards and specifications defined by the library services.

In accordance with this formulation, the national and local services envisaged within the ambit of the SBN should be more precisely defined. We should define the levels of participation in the services, including libraries or library systems interested in copy cataloguing and not only in shared cataloguing, as well as new ways of enriching the national catalogue. Furthermore, the question of the circulation of documents should be resolved, by eliminating the bureaucratic obstacles which have hampered it and adopting the relevant standards so as to allow ILL transactions with other systems.