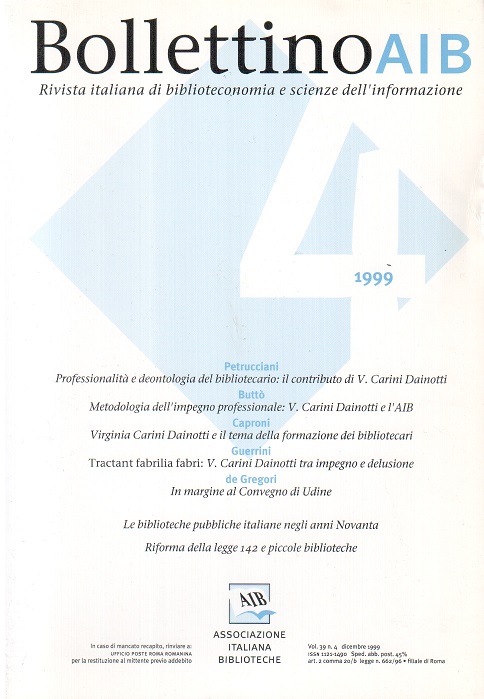 The organisation of a conference on "Virginia Carini Dainotti and library politics post world war II" has acted as a stimulus to re-exam a period of recent history of the library profession often noted in a rather summary way. The viewpoint taken by myself is that of professional ethics, a sort of mirror in which we find clearly reflected the key problems that librarians and Italian libraries tried to face at that time - particularly in the Sixties - and that are still relevant today.
Virginia Carini Dainotti entered, via her writings, into the debate on the big themes of democracy and freedom, and in particular the right to information, choosing the best minds of the left, from Norberto Bobbio to Lelio Basso, as her debating opposites and targets. Another theme that reoccurs in the writings of Carini Dainotti and in the professional literature of those years is that of the librarian as educator.

In her theoretical skirmishes Virginia Carini Dainotti remembered that in practice the librarian will always, inevitably be measured by three adversaries, the authority on which he depends, the community in which he works and its own temptations. According to Virginia Carini Dainotti the only point of reference could be professional standards, in particular where they define the criteria for materials selection, what is acceptable and what is not, and set the limits of the librarian's independence in respect to the political authority.
In one of her essays she also published a draft proposal for an articulated code of ethics, inspired essentially by the declaration of principles of the American Library Association (Library bill of rights), even if she presented it as a simple suggestion to the Italian Library Association (AIB).
Carini Dainotti was uncompromisingly faithful to these ideas, at least from when, at the start of the Fifties, she concentrated her activities on the problems of the public library and the creation of a nation-wide network of librarian services, that later became the National Reading Service (Servizio nazionale di lettura).
These themes were brought up very often by Carini Dainotti at the AIB congresses and at government conferences but in reality remained dead issues: only in 1994, more than twenty years later, the question was taken up by the Association and only in October 1997, at the Congress in Naples, the first Librarian's code of ethics was carried with unanimous approval.

As for the theory, Carini Dainotti collected documentation, mainly but not exclusively from the United States, and also reflections on problems such as how to reconcile the freedom of the reader with the selection of books entrusted to the librarian. Emphasis was placed on the refuse of labelling pratices - a problem we have today as well if one considers the debate on rating Internet resources.
One of the many merits of the works of Virginia Carini Dainotti is definitely the fact that she tried with all her might to introduce into Italy not only the concept but also the actual expression public library, to denote a library designed to meet the information needs of all members of the community and not, as was usual in Italy, a learned library formally open to all adults. She often argued against the division of libraries and librarians by the governing administrations rather than by the functions of the institutions.

The last point of reference to emphasize is the decidedly supranational dimension of the profession. If sometimes the abrupt Americanism of Virginia Carini Dainotti, for example in the debate at the AIB congresses on the question of cataloguing, may seem irritating, one need only remember and acknowledge that on the relevant issues mentioned here there existed at an international level and in more advanced countries a body of practical accomplishment and an acquisition of principles that in our country barely existed.
Her interventions constant calls for Italy to remain attached to Unesco and IFLA statements, and therefore to the need to respect and spread in our country the international principles of library policy and library organisation.
However, a break in Italian librarianship in the course of the Sixties lead to a certain isolation from the international professional community, after all the efforts made above all in the years immediately preceding and that are generally associated to the name of Renato Pagetti, president of the Italian Library Association.

The accounts of the discussions of these themes, often very lively, that cover the second half of the Sixties and the early Seventies are often despairingly provincial and inaccurate. Another characteristic is the lack of a sense of the quantitative dimensions of the problem of public libraries and more generally the lack of a scientific attitude to facts, as regards both planning and evaluation.
In the Seventies there was a strong generational and ideological break between Italian librarians. However, the real turning point in the life of the Italian Library Association is to be seen in 1969, with the election of Renato Pagetti. On the other hand, in the actual development of public libraries in the Seventies, due to a political and social push that also involved the local administrations and a new generation of librarians, it is difficult to see original professional contributions. The weak attempts to elaborate a new conception of the public library or new models of service seemed to dry up in a rather vacuous ideological debate on one side and in traditional practices on the other.