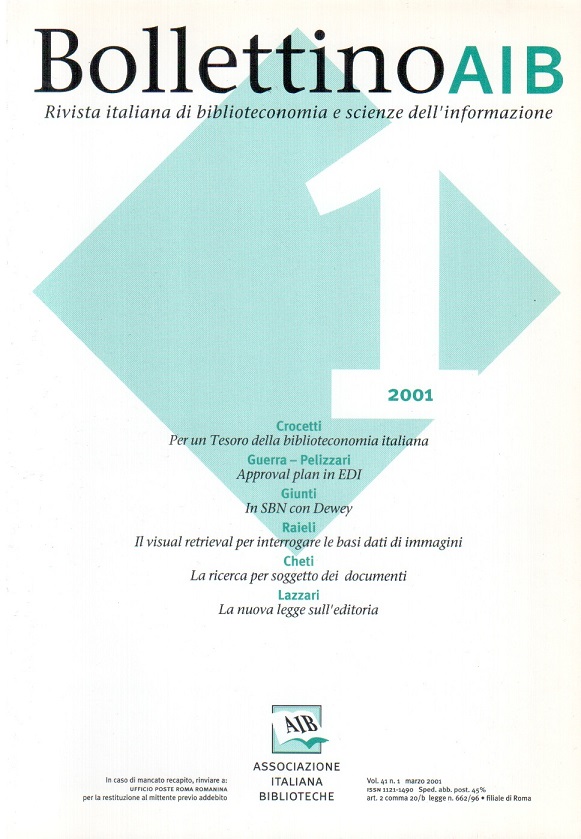 The article discusses the system of acquisition of library material through an Approval plan, using EDI (Electronic Data Interchange) technology.
The approval plan establishes both a system of acquisition and a policy of development of the library patrimony. The fundamental principle on which it is based is the replacement of an incremental or arbitrary flow of orders with a flow of monographs that have a character of automatism and methodicalness. This flow originates from a "profile of relevancy" carefully determined on the basis of the requirements of the users, such as to guarantee (at least tendentially) the coverage of all the subjects of specialization of the library. The elements that take part in the definition of the profile are both semantic and of other nature.

In parallel with the automatic flow of monographs generated by the plan, a residual-complementary flow of orders remains for the purchase of monographs that are not intercepted by the profile of interest of the library and for those of non-current publication considered of interest by the user.

The system of acquisition and development with the Profile of Relevancy will be even more effective and efficacious with the adopting of the EDI system. It consists in an exchange of structured trade messages which takes place directly between information systems. The direct information flow between supplier and customer takes place in telematic mode (that is, using the networks, such as Internet) and it is controlled by data processing procedures.

The system of acquisition and development with Profile of relevancy and the EDI system of information transmission can be justified autonomously, but their combined application increases their usefulness.
The integrated application of the two systems discussed in this work seems to have suitable characteristics for establishing it as one of the main development policies for acquisitions within Italian libraries, especially those of a highly specialized nature.