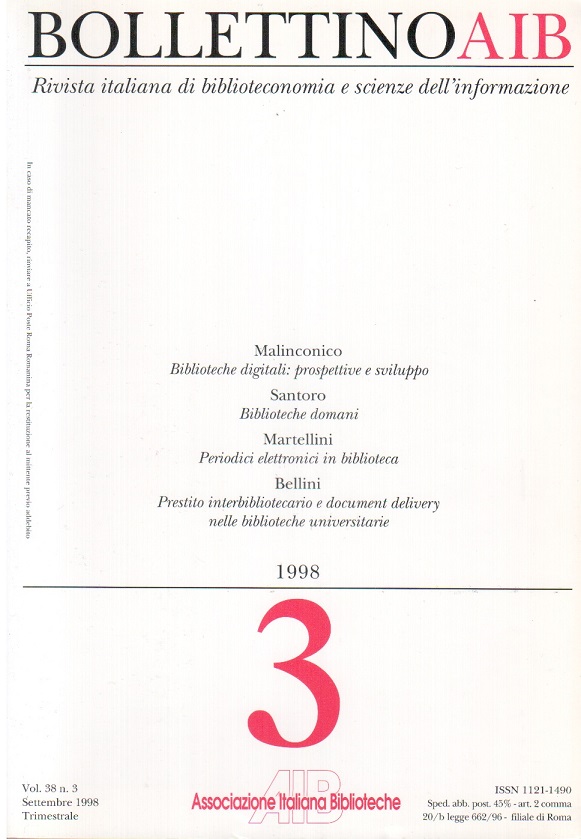 The extraordinary developments of information technology profoundly concern libraries, which are today experiencing a phase of substantial change. The most significant transformations have been on the one hand the automation of procedures and the realisation of online catalogues and on the other the growing presence of non-paper documentation, available on CD-ROM or routed through computer networks. These innovations have decidedly changed the image of the library, placing it before a radical transformation.

The term «virtual library» is now standard for indicating this new dimension of the library, even though the term «digital library» is also very common. We do not believe the two terms are synonymous: virtual library actually refers to a set of reflections and proposals which have developed following the advent of electronic technologies and have led to the birth of a new library paradigm; digital libraries represent on the other hand the concrete realisation of these proposals, which take place through the digitalisation of a large amount of paper documents and a new organisation of electronic information.

According to D. Kaye Gapen, the virtual library should be understood in terms of «remote access» to the contents and services of the library and of any other information source; it is given by the sum of the various documentary - paper or digital - collections distributed throughout the planet and linked to each other by a set of computer networks which can annul distance and facilitate the finding of documents. This definition highlights the two essential aspects of the virtual library: on the one hand the generalised and almost universal availability of knowledge, realisable through the sharing in network of all the information sources, and on the other the very close collaboration between libraries, which can reach and use this large heritage of information thanks to telematic links.

Neither of these aspects are recent phenomena, but they are part of the West's documentary tradition; it is therefore possible to examine the "prehistory" of the virtual library, i.e., the various moments when the cooperation between libraries and the desire to command the whole of knowledge manifested themselves in a series of ideas for concrete projects.

Technological innovation first involved libraries in the 1970s, with the first library automation systems and the launch of a series of cooperation programmes. It continued with the creation of the OPAC and the use of online databases. Subsequently, the advent of CD-ROMs and Internet have led to the final change in the library paradigm, which is no longer based on the massive acquisition of documents, but oriented toward the access and use of remote resources.

The paradigm shift from ownership to access has had consequences of extraordinary import on library organisation. Firstly, acquisition management has changed, becoming increasingly oriented toward the access to documents available on the network or through interlibrary loan and document delivery systems. Secondly, collection management has changed, because the library collections today consists of both paper and resources, owned locally or accessible via networks. Thirdly, financial management has changed, because it is possible to "reallocate" funds to the benefit of other sectors of the library (hardware and software costs, expenses for outside staff for repetitive tasks, costs related to document delivery and interlibrary loans). Furthermore, libraries need a careful planning policy which defines the purposes and aims of the services to be provided, and new criteria for assessing their results. Important transformations are taking place in the field of technical services, with the adoption of cataloguing and indexing criteria which take account of the mixed - paper and electronic - nature of the documents available. There are also strong changes in the reference services, which are aimed on the one hand at the search and organisation of information resources and on the other at the capacity to educate users on the better use of said resources: this leads to a true and proper "convergence" between technical services and public services. All this leads one to think that the librarian's role should continue to strengthen, due to the qualitative and quantitative extension of his tasks: however the presence on the market of new instruments, conceived to meet users' needs in a simple and friendly manner, would appear to promote the trend toward "disintermediation", in other words towards the end of the librarian's traditional role of intermediary between documents and user. Users in fact are increasingly able to efficiently use the information channelled by digital media, and this is a element of uncertainty and worry for librarians, concerned that they may disappear with the advent of increasingly advanced technologies and instruments which win the users' favour. However, close analysis allows one to identify a series of elements which contrast this vision. Today in fact the librarian's fundamental task is to educate the user, to orient users in the selection among available information sources, in the adoption of correct search strategies and in the critical assessment of the results. Moreover, to avoid the information overwhelming the user and distancing him from the truly significant resources the librarian should "validate" the sources through their careful selection and organisation.

But many observers believe the librarian's primary role is that of a fully-fledged "information producer", sharing with the institution of which he is part the responsibility for the creation, organisation and use of knowledge. We are faced with the knowledge management model elaborated by Richard Lucier and which appears the most innovative and dynamic proposal of library activity organisation. According to this model, the library is introduced at the start and not at the end of the information transfer cycle and librarians are fully involved in the information production process, and not only in its management and dissemination.

The idea of the librarian as knowledge manager is therefore a fundamental goal in the virtual library's strategies; thus the librarian, freed from repetitive activities thanks to the use of sophisticated technologies, can revert to that role of producer of knowledge which has been associated with his image for centuries.