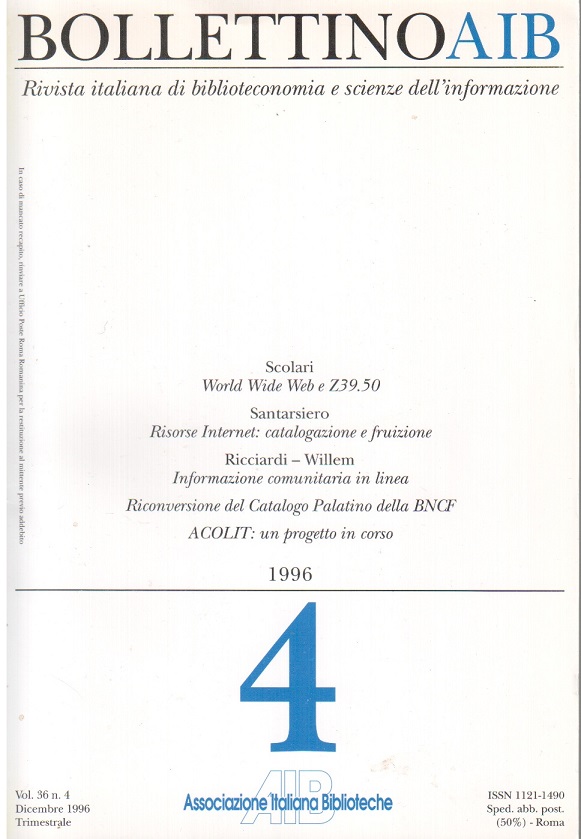 "The concept of grey literature will disappear to evolve into a new concept of institutional network publishing". This phrase, pronounced by J.S. Mackenzie-Owen in December 1993 at the First International Conference on Grey Literature, has proved prophetic, at least as regards the European Union's electronic information services.

After an overview of the evolution of the Internet in these last three years, the authors turn their attention to the current situation. The full text of much of EU institutions' informational and documentary production is now published online and no longer in "traditional", paper, form. Electronic information cannot therefore be seen as a mere duplicate of the paper version and the paper version cannot be considered a substitute of its electronic cousin, in view of the latter's availability, currency and ease of access. The question is whether it is correct to define this particular literature as "grey", in other words, little enlightened and fleeting.

The article gives an answer, and also try to define grey electronic literature by analysing various documents to be found on Web pages or in the databases of EU institutions and by comparing their characteristics and availability limitations, seen from both the technological and the administrative or intellectual aspect.

The article examines fee-based services, such as RAPID, the European Commission's spokesman database (including the speeches of the Commission's members and the press releases of the Council of Ministers), and TED, Tender Electronic Daily, the electronic version of the supplement to the EU's Official Journal for calls for tender. It is seen that there is free access to extensive or summary information supplied by the various databases of the CORDIS service on the technological research and development programmes; the full text, for example, of the Reports of the IT Market Observatory (IMO) or the studies of the Legal Advisory Committee (LAB), which mainly deals with intellectual property rights, both offered on the Internet by the server I*M Europe.

The article also examines the EU's information policy and concludes that it forms part of a specific strategy for economic and democratic growth (creation of jobs and administrative transparency respectively) which aims at making the public sector's online information more complete and accessible to all.