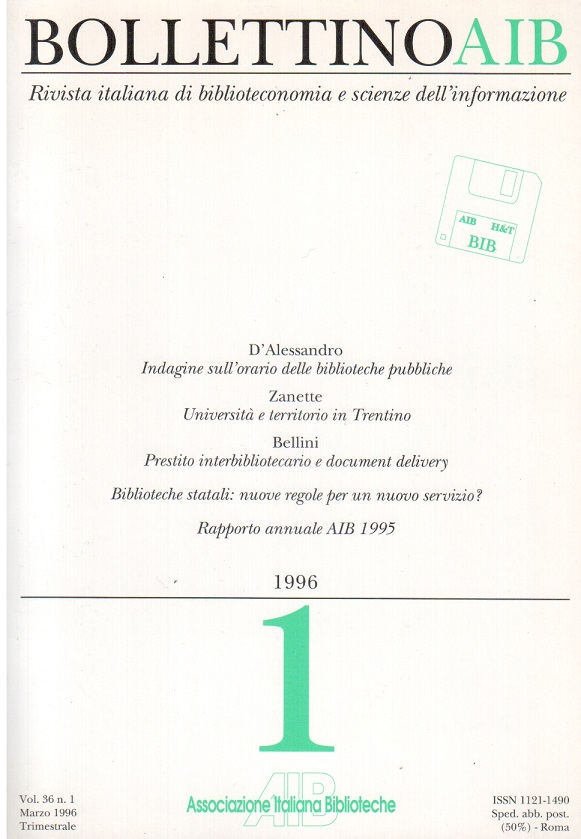 The starting point for this study was Article 22 of Law no. 721 of 23 December 1994 and the subsequent circular of the Ministry of Civil Service. These provisions regard public offices and lay down that at national level the opening hours of said offices should be spread over five days (Monday to Friday) with afternoon opening and Saturday closure. However, exceptions are envisaged for public services of a continuous nature which have to be always open to provide services every day of the week. The aforementioned circular, while envisaging concrete examples of services which should be provided six days a week, fails to mention public libraries.

The study analysed the opening hours of public libraries in provincial capitals in Italy. With but a few exceptions, the data refer to the period May-June 1995. The opening hours examined are the normal opening hours, in other words, no account has been taken of periods of closure due to stock-taking or summer opening hours.

However, if library opening hours are related to city size, there is some uniformity in the average. Another significant element is the number of libraries open six days a week without a break, and those open five and an half days a week. The picture, albeit sketchy, which emerges from this study reflects the attention, more administrative than cultural, of local authorities vis-à-vis libraries which in turn only reflects the reality of Italy with its ever-familiar lack of rules, desire for autonomy and plethora of contradictions.