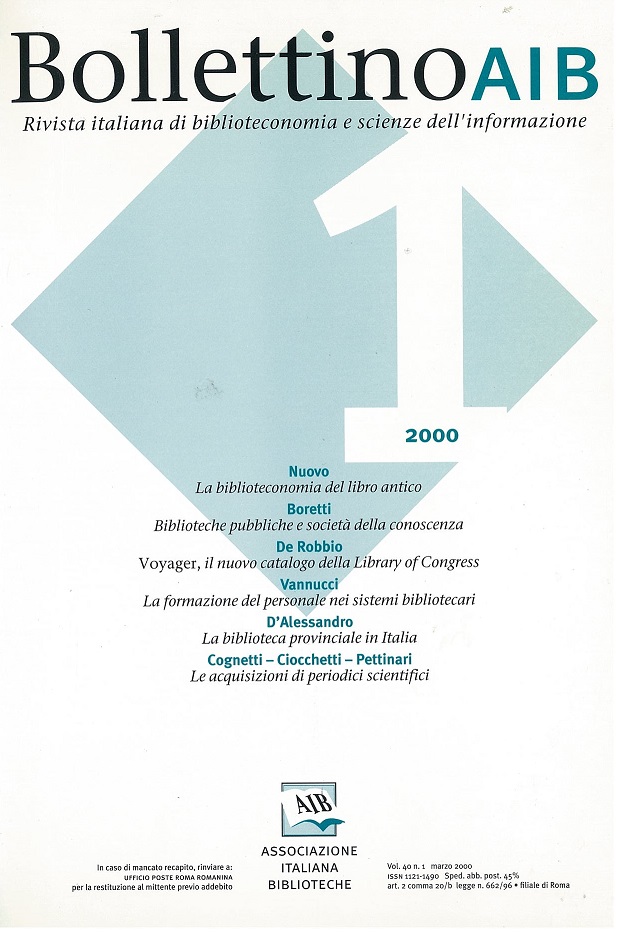 Provincial libraries are public libraries which appear as a service to the community of a provincial administration. The definition "provincial" refers to the owner body and not to the area served by the library. We can include with the provincial libraries proper the consortium libraries which have the province among their owner members. Provincial libraries are public libraries: that is to say, they carry out a service that is open to the public without any distinction of social or cultural category and without any limitations except for those deriving from the regulations concerning the use of the library. They are usually of medium or large size with a direct area of influence on the provincial territory and an indirect one on the regional and inter-regional area. The operational range of the library derives both from the quality and from the quantity of its contents, among which of particular importance are the holdings in local history, both because of the catchment area which flows into it and, moreover, because of the presence in the regional capital of institutes of high culture (universities, musical conservatories, academies, etc.).

How many are these provincial libraries? It appears that (except for undesired omissions) the provincial and consortium libraries number 34, plus the Bolzano library that is in the course of being established: of these, those established before 1950 may be considered "historical", while those born up to the present day are considered of recent establishment.

An historical aspect of the life of the provincial libraries is that up to just a few years ago these libraries had no official connection with each other and had always operated in forced isolation both with respect to the territory and to other provincial realities. There was a turning point in September 1997 when the first national conference on provincial libraries was held in Pescara: on that occasion the theme of their public function and their institutional role was dealt with. This was followed by the 1998 Conference on management and professional education, and the 1999 Conference on professionalism and staff management.

The Pescara conferences acted not only as an occasion for encounter between provincial librarians but also marked the start of a Coordination between them. This Coordination (which although moving in close collaboration with the AIB, is not, at this time, either a study group or a commission) appears as the expression of a collective desire aimed at reciprocal knowledge and exchange of information.

Another peculiarity that characterizes the provincial libraries is that the majority of them (especially in the centre-south, where they are the only or in any case the main library of the regional capital) are entitled to legal deposit for all publications printed within the province.