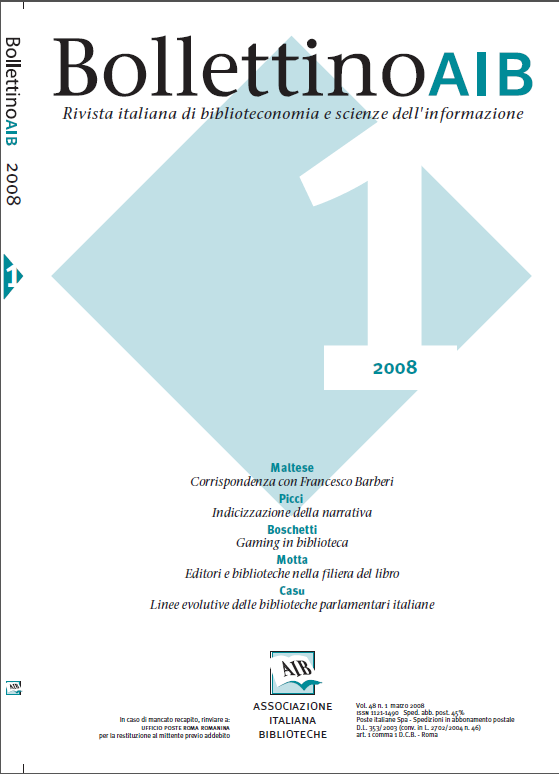 In Italy, public libraries' attention towards fiction literature has been for the most aimed at the promotion of reading, while the development of more structured instruments for the selection of books and to improve help-desk services occurred only rarely. In this paper, we take this observation as a starting point for a comparative analysis of a few countries that have a long history of creation of semantic tools for the promotion of reading and of reader’s advisory services.
In the United States, already in 1904 Charles A. Cutter was suggesting to catalogue fiction and poetry according to their subject matter, but it was in the 1980s when the debate came of age. The publication of the Guidelines on subject access to individual works of fiction, drama etc., by the American Library Association, preceded a project for the indexing of fiction literature carried out by the Library of Congress and by a string of public and academic libraries. During the same years, OCLC embarked in Fiction Finder, a project aimed at improving the possibilities of search on fiction by referring to the Guidelines, with the data organized according to the FRBR model.
In the Nordic countries the first projects in this field followed a survey, carried out during the 1970s by the Royal School of Librarianship in Copenhagen, aimed at better understanding the readers’ needs. The results of the survey, based on the queries of the visitors of public libraries, led to the creation of Book House, an experimental project that would became the basis of a series of thesauri dedicated to fiction literature and that are now adopted in Denmark, Finland and Sweden.
In Italy, too, we have recently began to observe a few attempts in the same direction, such as the ones by “Fondazione per leggere”, of Servizio Biblioteche della Provincia di Mantova and of Sistema bibliotecario della Provincia di Verona.