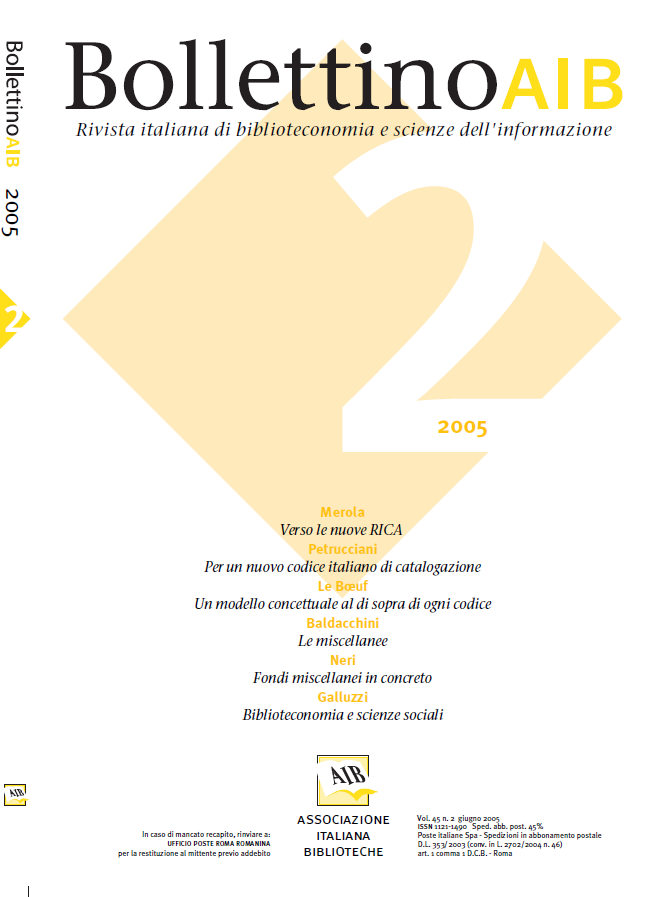 In the first stages of its work, the RICA Committee discussed at length the requirements, motivations and objectives for the revision of Italian cataloguing rules (Regole italiane di catalogazione per autori). Opinions differed widely in the first phases, but the Committee afterwards reached firmly shared convictions. The discussion was not held abstractly, but was accompanied by a detailed and careful analysis of the text of the code, as it stands now.
It was precisely the careful analysis of the code, both of each and every one of its paragraphs and of its overall structure, that was decisive for reaching the conclusion that the drafting of a fundamentally new text was a necessity. A new text both in its articulation and in its "style" of presenting the matter, within which many of the rules included in RICA would be re-used.
It should be stressed that these conclusions regard the text of the code, not the cataloguing principles on which it is based. These principles remain on the whole workable and the Commission is well aware of the great progress that the RICA have brought to cataloguing theory and practise of cataloguing in Italy, explicitly and strictly basing it on internationally agreed principles that respond to the results of the most authoritative scientific investigation on the subject.
But, as a code of rules, for various reasons, the RICA no longer respond to current requirements. The most obvious of these are perhaps the change in the forms of catalogue production and searching which has passed from a static support to the use of automated systems, and the need, greater now than in the past, to treat in the same and integrated way a wide range of library materials, not just printed books and journals. Furthermore, the (stand-alone) catalogue of a single library is today often just a virtual subset of a collective catalogue (at national, regional, university, etc., level).
The RICA revision process forms part of a phase of keen international activity in the field of cataloguing, following a period of basic stability characterized by the diffusion of the ISBD and of the new codes based on the Paris Principles.
On of the main criteria that we followed was that of developing rules in an orderly and logical way separating the various steps to be taken and examining the various questions one at a time, not all at once.
Among the various parts of the code, the Commission gave priority to those regarding the form of the headings. The draft rules for uniform entries for Persons were posted at the Commission's website, for discussion at large, in June 2004, with a second draft in December. The draft rules for Corporate Bodies will be posted in July 2005.
These draft rules include some important changes from previous pratice: e.g., they reflect a more consistent application of the principles of author's preference and of national usage for names of persons.
The concept of separate "bibliographic identities" was considered and rejected, as it seems a confused concept, conflicting with the principle of uniform headings, with no real utility, as the Lewis Carroll/Charles Dodgson's case shows.