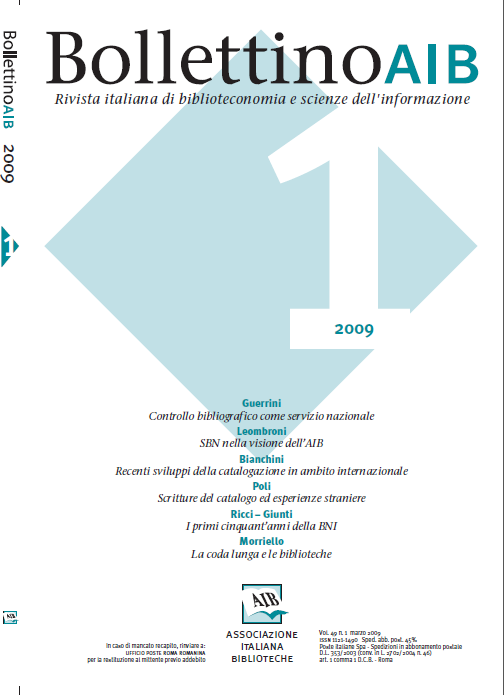 The National Library Service has formed part of the political and professional agenda of the Italian Library Association for many years.
From a certain point of view the idea of an SBN as developed by the AIB is in line with the political tradition of the Association or with what can be considered the 'modern' political story of the Association that had begun in the Sixties: awareness of the plurality of the institutional levels of our country, regionalism, institutional cooperation, nationalization of state intervention.
Now we must have the courage to imagine a new frontier for Italian libraries and for the SBN. The SBN cannot coincide either with a computer project, or just with a bibliographic system. We must imagine a new cooperative environment that will permit all Italian libraries to deliver a minimum level of services and to create value for citizens. A cooperative environment based on libraries rather than institutional levels, on inclusion and not on assimilation, on plurality, on diversity and on sharing of values and objectives. An environment that will look to the future and that will call young librarians especially to trace its outlines so promoting the contribution of new cultures, able to dare and imagine the new without an excessive respect for consolidated convictions.
A new cooperative environment requires courageous political action from the Association: new cooperation semantics must be drawn up, cooperation must be extended even to areas beyond libraries, a new language and new rules must be shared, a different division of national and local services must be imagined, the national services must be restructured basing them on an Italian National Library that in a federated perspective can be a reference point for the memory and future of the country and may contribute to the construction of its European identity. Above all it is necessary to create a sort of distributive community in which all actors, all communities that belong to it contribute to developing a chain of values for Italian citizens, in which service is more important than software, in which the user is more important than the catalogue, in which the future is more important than the past and its burdensome inheritance.