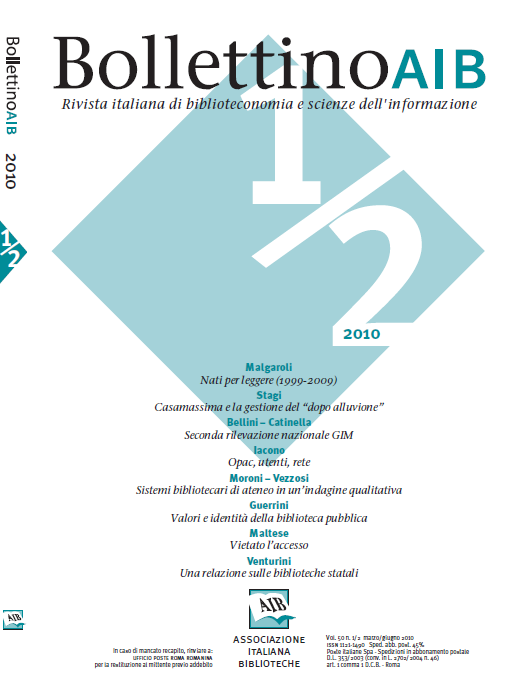 Nati per leggere (Born to read) is the italian national program to enhance the inclination to read in children from a very early age, promoted by the professional and cultural organizations of librarians and paediatricians: Associazione culturale pediatri (ACP), Associazione italiana biblioteche (AIB) and Centro per la salute del bambino (CSB).
The mission of Nati per leggere is to cultivate the inclination to read in children, together with their parents and carers in general.The program involves librarians, paediaticians, educators and volunteers through the local services where they work or attend.
The present article is aimed to describe the way the program has developed all over the country from the beginning in 1999 to 2007, when the NPL national committee promoted a national survey to know how many NPL local units were active, how many professionals engaged, how many children and families got in touch with the program, which activities were practised and the economical resources invested.
The Nati per leggere appeal has received support from the more mature central and northern Italian libraries as well as from many paediatric centres and the more active public libraries of the south. At the end of 2007 the project concerned areas corresponding to 32,83% of the national population while in 2003 it was 15,22%. By the same period 7468 professionals shared the program, 1566 librarians, 1142 paediatricians, 3162 among nurseries' and playschools' educators, 1206 volunteers and 302 other cultural/social/health professionals. In 2007 the local projects met 258.698 children under 6 years of age, representing the 23,42% of the target population of the areas involved.The program which is not financed at the national level by state and national government, has raised in seven years (2001-2007) Eur 5.328.472 through the NPL local units.

The program aims to foster its activity in order to reach a greater number of children and families, sensitizing local administrators and professionals engaged in services for families and children and working with the whole booksystem (libraries, publishers and booksellers) to give every child a better chance to grow.