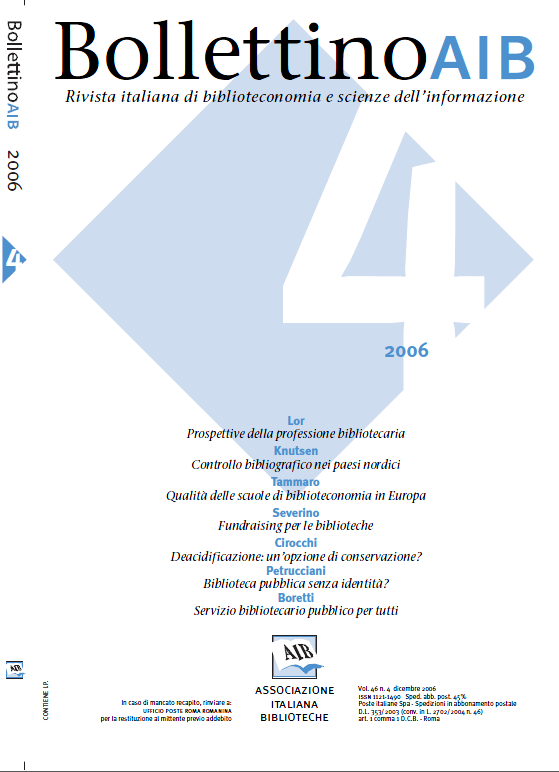 The Bologna Process, the reform process of the universities after the Bologna Declaration, currently represents both a great opportunity and a challenge for librarianship schools in Europe. It is an opportunity for governments to stimulate and support the internationalization and necessary change of higher education institutions: all European nations have renewed legislation for a reform of the universities in the direction of a common architecture of courses and a better transparency of the teaching offer. It is a challenge, as it is difficult to achieve true cooperation in Europe for the overall improvement of university education. The main goal is that of allowing each student to move freely from one university to another, and be able to compete after graduation in the European labour market for obtaining a workplace.
It is the first time that internationalization and quality assurance are considered together in Europe. In the Bologna Process, which has been guided by politicians up to now, the professional sectors must now become active. They are in fact responsible for constructing the so called zones of mutual trust, areas in which mutual trust is based on agreements and concrete results is created (declarations of goodwill are not sufficient). Some sectors, as for example that of engineers, have already formed agreements and projects for the internationalization of the quality assurance processes.
The article analyzes the problems to be faced when constructing a quality assurance process that is both national and international, centred on the specificity of Library Schools in Europe. The question for which an answer must be found is: how can the Bologna Process improve the quality of education for information professionals in Europe? The paper focuses on the results of a survey carried out by the IFLA Education and training section in 2004. This survey describes how at the moment quality is evaluated in Library Schools in Europe. In particular: it tries to identify the aims and value of different approaches to quality assurance in Europe; a taxonomy of quality procedures in use in Europe is presented; the quality indicators used for Library Schools are defined and also compared with those at international level.