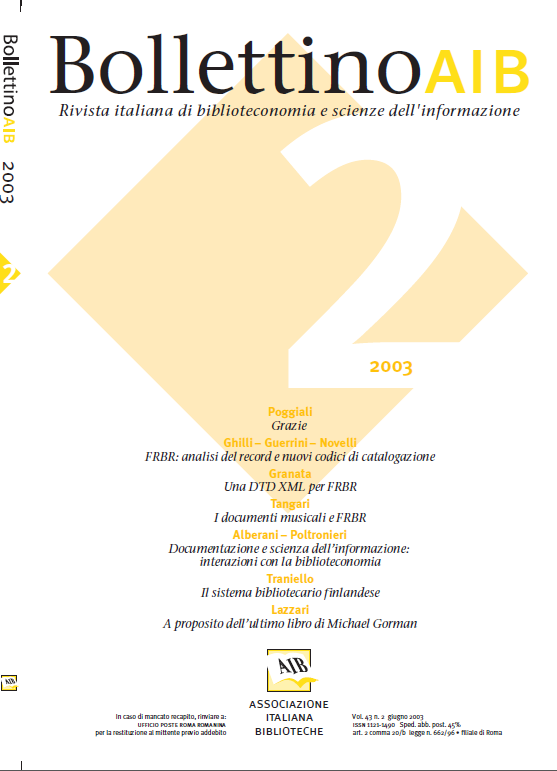 The final FRBR report was presented at the IFLA Congress of Copenhagen in 1998. This was the fruit of the work of a special IFLA Study Group that had begun in the early Nineties. The study of the functional requirements of bibliographic registrations derives from the need to deal with the problems that originate from the costs and development of cataloguing data bases. The path undertaken by IFLA for solving these aspects of the management of bibliographic information is the record analysis and its structure. FRBR, Functional requirements for bibliographic records, raepresents an innovation in the study of a record because it introduced a rational and rationalizing method of analysis of the results of the cataloguing practices.
The IFLA study analyses a record through the creation of a model that represents <<an initial attempt to establish a logical outline that can be of assistance in the understanding and future development of agreements for bibliographic descriptions>> and which serves as a starting point <<for a series of future studies that may be of special interest to those who are involved in the development of cataloguing codes and support systems for the creation, management and use of bibliographic data>>.
FRBR is a conceptual model that describes an internationally recognized bibliographic record; it analyses the record that results from the application of the current standards and norms.
The FRBR model is orientated, focalized on user functions (find, identify [or better, localize], choose, obtain). The main entities (work, expression,demonstration, item) are identified on the basis of the functions carried out by the user, that is to say, they are those which the users seek, identify, choose and obtain with a current bibliographic registration.
FRBR goes a very long way towards satisfying the need for reflection strongly felt by the library community, but it should not be confused with a group of principles like those approved in Paris in 1961, which had the deliberate intention of forming new cataloguing codes. FRBR offers no solution or proposal of solution to the enucleated problems; it is an instrument of analysis of a record and its functionality. Precisely because of this, FRBR represents an epocal watershed, inasmuch as it is an essential instrument for the elaboration process of a new way of registering bibliographic information, a new way that requires further reflection and the development of a new model for structuring records and above all a new type and concept of catalogue.