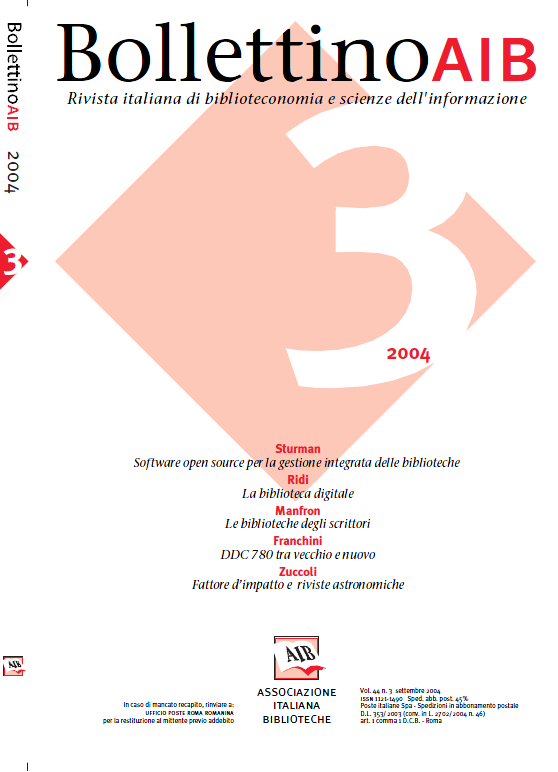 In the years 1998-2001, the IF of two of the main astronomical journals, «Astronomy and Astrophysics» and «The Astrophysical Journal», was underestimated by ISI. The American Institute claimed that the wrong IF was due to the astronomers' bibliographic negligence.
The acronyms used in references (A&A and ApJ) instead of the official abbreviations (ASTRON. ASTROPHYS. and ASTROPHYS. J.) were too short, for ISI optical recognition system, and in the end they turned out to be challenging.
The astronomical community must admit to some bibliographic negligence: references with no final pages or even no titles, variations on the author's name, but the use of acronyms derives from a precise choice. In the 1980s, as a consequence of the increase in the production of astronomical literature, the cost of journals increased dramatically, too. The editors of the main journals tried every solution to contain the expenses, such as increasing the format of their journals while maintaining the same number of pages and also adopting short acronyms.
Nowadays the astronomers, together with the whole scientific community, have a very critical attitude towards the IF as a tool for evaluating research. Their attitude is part of a general criticism towards not-academic publishers and their monopolystic grasp over scientific literature; Barschall's studies about the cost/effectiveness of physics journals showed that some publishers do not fit in a correct relationship between the high price of their products and the real quality of the journals.
The astronomers already have free databases of preprints and scanned articles: the e-print archive of Paul Ginsparg (Los Alamos) and the ADS database, sponsored by NASA. The latter provides the citations to each article.
Since the method to calculate the IF shows frequent faults - such as those happened to «Nature», «Science» and the astronomical journals - the astronomers' autonomistic tendence will probably lead to the production of their own Citation index and Impact factor, free of charge and with no confusion among acronyms.
A final remark: the problems connected with IF and the use of acronyms/abbreviations have been generally studied by astronomers, not by librarians. If the librarians' skills had been involved, they could have provided an useful interface between the authors and ISI.