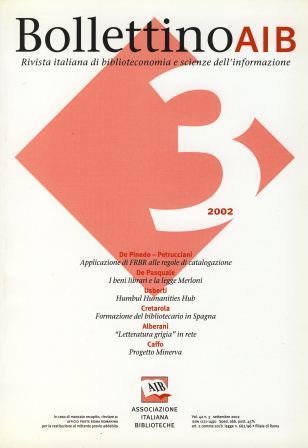 The RICA, published by the ICCU in 1979, have in these years constituted a sound code of cataloguing rules. Their characteristics, derived for the choice and form of the authors (persons and bodies)and of the titles from the recommendations of the Principles of Paris and for descriptive cataloguing from the directives of the various ISBDs, have promoted their diffusion in different types of libraries throughout the country.
All records of the Italian National Bibliography are done according to the RICA since 1981. We can therefore consider the RICA as a national code in all respects.
The RICA were not however conceived as a definitive and unchangeable structure. It had already been indicated in 1978 that a permanent Commission was required to care for their constant update and any possible simplifications.
The tasks and composition of this Commission were established at the end of 1997 with a view to updating and revising the rules according to international developments and directives, so bringing them into line with the evolutions that had taken place in the span of over twenty years since their publication.
In the last year the Commission has considered it opportune to devote part of its activities to an in-depth examination of the prospects offered by the new model derived from the IFLA's study on the functional requirements for bibliographic records (FRBR). The aim of the study is the creation of a structural scheme in which every bibliographic entity, duly defined and 7with all its characteristics, is logically correlated to other similar or different entities in an articulated grid. This should then satisfy the various demands that different types of users make in their search and consultation of bibliographic records. The work that the Commission has carried out up to this time has consisted in an as careful and documented as possible control of the various ways of application of the structural design of the model, with all its innovative implications, on the framework of a code of cataloguing rules. It has also studied the actual effectiveness and practical qualities of the solutions derived, from the point of view both of the results and of any possible obligations.
As well as examining the application of the FRBR model in its complete form, the possibility of its development in a reduced and personalized form was also considered. This would be done according to the requirements of the individual institutions and the data could be increased and enriched during the reutilization of the bibliographic record in a cooperative system. This solution could satisfy various requirements, including that of the limitation of cataloguing costs.
The RICA are fundamentally dedicated to the choice and form of the headings for authors and titles. The new structure planned for a cataloguing code will still be focussed mainly on the access points, including all the types of responsibility connected with new materials and formats. As regards the bibliographic description, the code will continue to provide directives at a general level, referring to the individual ISBD for more detailed indications.
This contribution should be considered as an on-going document which contains part of the work carried out by the Commission and the conclusions reached thus far.